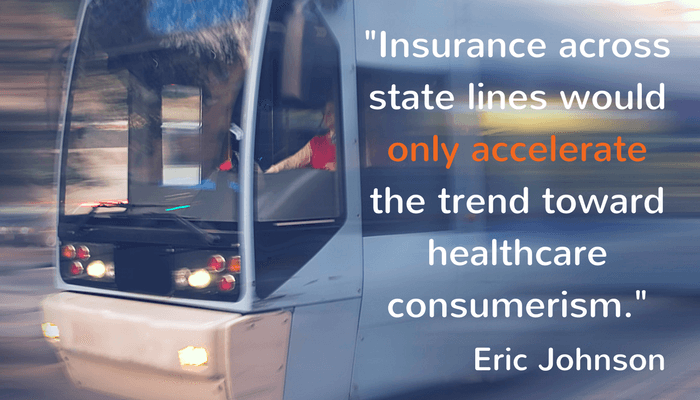 One of the big Republican ideas that’s notably missing from the American Health Care Act is the proposal to allow for the sale of insurance across state lines. This is an idea that President Trump REALLY likes. So does Speaker Paul Ryan. And Senator Ted Cruz. And HHS Secretary Tom Price. I could go on.

What I have noticed, though, is that not a lot of people in the insurance industry like the idea. I’ve done a ton of speaking about health reform recently, and whenever I mention the insurance-across-state-lines proposal, most brokers just roll their eyes. The feedback I get is that it won’t work in today’s network-based system or that it’s already legal but nobody wants to do it. There’s some merit to both of these statements.

Is it already legal to sell insurance across state lines?

Let’s start with the second argument: that it’s already legal for insurance companies to sell insurance across state lines. Is that true? Sort of.

A February article from the National Conference of State Legislatures (NCSL) notes that insurance companies “in each state are protected from interstate competition by the federal McCarran-Ferguson Act (1945), which grants states the right to regulate health plans within their borders.” While large, self-insured employers are exempt from these state regulations, fully-insured plans must play be the rules of the states in which they operate. This changed somewhat with the ACA.

As health care strategist John Marchica explains in Health Affairs Blog, “section 1333 of the Affordable Care Act allows states to establish what are called ‘health care choice compacts,’ which permit insurers to sell policies to individuals and small businesses in any state that participates in the compact — provided they abide by specific rules.”

According to the NCSL, five states (Rhode Island, Wyoming, Georgia, Kentucky, and Maine) have already passed legislation allowing for the sale of out-of-state health insurance policies, and another 16 states have considered laws that would permit the sale of insurance across state lines. A possible bill clarifying the rules and simplifying the process might encourage more states to get on board with the idea.

Legality isn’t the only question

Even if it is legal and states are in favor of the strategy, the truth is that insurance across state lines will only become a reality if insurers are willing to sell these interstate plans, and right now they seem to have little interest in doing so. To date, no insurance carriers are offering interstate plans in those areas where it is legal. The question is whether this would change if the ACA were repealed.

What would make this strategy work?

Obviously, we don’t know what carriers are considering behind the scenes, but there are two requirements that seem essential to making an insurance-across-state-lines strategy work:

1. Reduce the risk of adverse selection: The American Health Care Act would permit states to apply for waivers that would allow them to eliminate some of the essential benefits and rate policies based on pre-existing medical conditions. To the extent that some states stick with modified adjusted community rating while others increase premiums for sicker people, insurers in community-rated states could experience adverse selection if they sell their plans in other areas. Rather than paying a higher price for policies in their home state, consumers in states that apply for a waiver would likely purchase plans from states that don’t charge more for pre-existing conditions. This will not be appealing to carriers in community rated states.

Of course, what we could see happen is insurers could congregate in states that allow them to rate for pre-existing conditions and sell those policies in states with more restrictive rating rules. In other words, combining the waiver with insurance across state lines could have the effect of eliminating community rating altogether.

2. Eliminate the provider networks: One of the big criticisms of the insurance-across-state-lines idea is that we currently have a network-based system; HMO and PPO plans contract with a network of providers and pay for little if any care received outside of the network. Under this system, insurers with the best network contracts are able to offer the lowest rates and tend to gain a greater market share. It’s difficult for other carriers to break into the market, especially out-of-state plans without an existing network of providers.

In order for the across-state-lines proposal to work, carriers would likely have to eliminate their provider networks in favor of a reference-based pricing model, and it’s unclear whether consumers are ready for that at this point. Ready or not, it may be happening sooner rather than later.

For insurance advisors who don’t want to get caught unprepared if this does become law, it may be helpful to spend some time thinking about what sorts of products or solutions would accompany an interstate insurance strategy. To do that, let’s focus on the second point from the previous section—that we’d almost certainly see networks dissolve and reference-based pricing emerge for these new interstate plans. What would that look like for the consumer?

Right now, health plan members rely on discount provider networks when they need medical care. They’re not very good at negotiating with medical practitioners, so the fact that it’s already done for them certainly makes it easier. However, provider networks also tie consumers’ hands. Even if they were good at negotiating with medical professionals, the fact that the rate is already agreed on makes it very difficult for healthcare consumers to shop for medical care based on price. That would quickly change if these networks dissolved and carriers paid in reference to an existing fee schedule rather than paying a contracted rate.

For example, under a reference-based pricing model, a plan might pay 150% of the Medicare rate and the member would pay any excess amount. This payment model would give healthcare providers an incentive to lower their prices and/or to compete based on quality, and consumers would make the ultimate choice based on what’s most important to them.

Put another way, a push for insurance across state lines, which would require bipartisan support in the Senate, may end up failing to get the required votes or could fail to gain the interest of insurance providers. If it were to work, though, we’d almost certainly see an increase in reference-based pricing models that pay based on a fee schedule rather than negotiated rates, and that would rapidly expand “consumer-directed health care” since consumers would weigh cost and quality when shopping for healthcare services.

Here’s the funny thing: we’ve been predicting that, with or without the American Health Care Act (AHCA) becoming law, we’re going to see an increase in healthcare consumerism in the very near future. As prices increase and people buy less insurance to keep premiums down, consumers are taking a more active role in their healthcare decisions. If the AHCA or some other version of “repeal and replace” does become a reality, we’ll see an expansion of HSAs and more of an emphasis on price transparency. Insurance across state lines would only accelerate this trend toward healthcare consumerism.

And that’s sort of the point of this article: 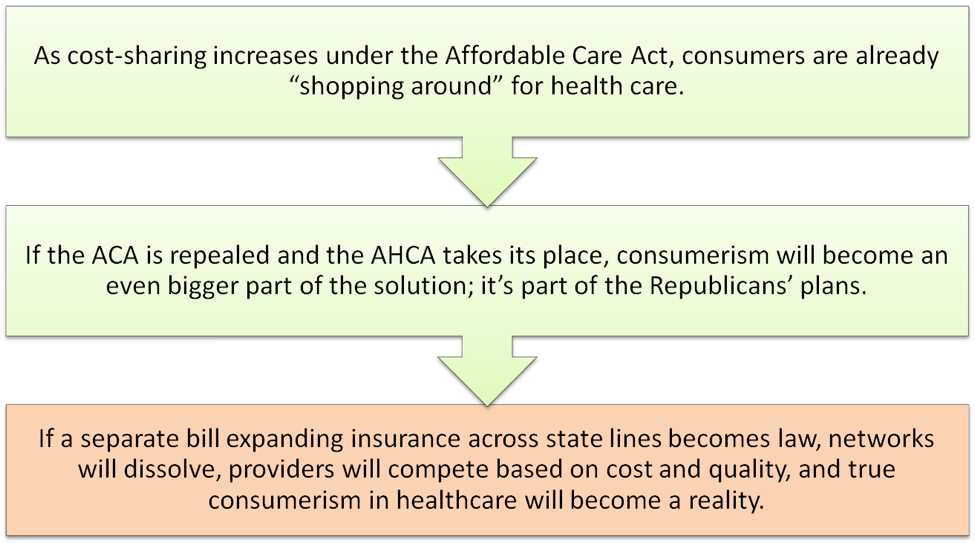 It’s not a question about whether CDHC will be part of the solution going forward; the only question is the degree to which consumers will be involved in their healthcare decisions. In any case, brokers need to be prepared because there’s no scenario in which consumer involvement will decrease.

What that means to you as an insurance advisor is that you need to search for solutions outside of the health plans you’re selling that will give your clients information and alternatives so they can make better healthcare decisions. Here are a few ideas:

All of these solutions are already a good fit for clients who are seeing their out-of-pocket costs increase and provider networks shrink. They’ll become even more popular if the ACA is repealed and replaced, and they’ll be absolutely indispensable if the insurance-across-state-lines idea begins to gain steam. Your competitors are already recommending these solutions; if you’re not, you could be left behind.

Now it’s your turn! What are your thoughts about selling insurance across state lines? How do you see the potential of networks dissolving and a move to reference-based pricing playing out in the industry? Comment below or email me at eric@freshbenies.com.