LEADERS ARE READERS: 5 TIPS FROM A BUSINESS BOOKWORM 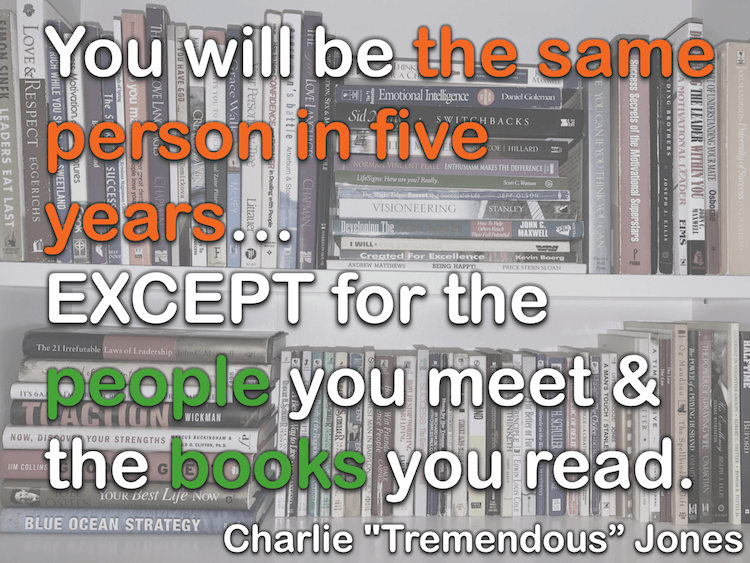 When I was in college, a friend called me with all the enthusiasm of a new convert gushing about an amazing book he read from an author named Napoleon Hill. The book was called “Think and Grow Rich.” It was the start of my love affair with business reading. And now, 30 years later, I KNOW I wouldn’t have achieved anything near what I have, if it weren’t for a habit started with that one book.

I believe all great leaders must be continual learners. I’ve never found anything as effective as reading to develop oneself and learn the great lessons of life. I’m sharing 4 tips I’ve learned over the past couple years since college (OK, maybe it’s been a few more than a “couple years” since college)…

There are multiple excuses NOT to read. After college, many people swear they won’t read books again. Some only read for entertainment, not for education. Every single one of us would say we don’t have time. They’re all just excuses.

Try listening to audio books while you’re getting ready in the morning. Really, how much mental energy are you expending brushing your teeth? Wouldn’t that time be better spent feeding your mind, too? Turn off the TV and prioritize reading for just 10-15 minutes a day. After a year, you’ll have spent 50 hours reading. I factored in weekends and vacations off. You’re welcome.

“The man who does not read has no advantage over the man who cannot read.”

2. Make it a priority

“Learn Constantly” is one of our core values at freshbenies. Learning plays out in many ways for us, such as how we celebrate failures, re-hash sales calls, role play how we tell the freshbenies story, and even post-mortem meetings to discuss what worked and what didn’t on big projects.

In fact, next month we’re launching a new broker and employer training series for our appointed brokers and employer clients. If you’re in that group, watch for it and please let us know your thoughts. Because we read up (see how I did that) on the best ways to help people learn, it includes a mix of reading and watching – we know how busy people are, so we provide it in “snackable content” that’s engaging, too!

“Whenever you read a good book, somewhere in the world a door opens to allow in more light.”

For freshbenies, this goal to learn constantly also plays out in another simple idea: a few times a year our entire team reads a book together. We choose one in advance of each company-wide retreat which we do three times per year. At the retreat, one or two team members volunteer to take us through a “read out” of the book (some of our team say they didn’t volunteer – that they were “volun-told,” but they still end up having a good time…I think!). How they want to do it is up to them. They might summarize it, discuss their favorite parts, survey the team for their favorite lessons, or approach it in whatever way they like.

Reading together and sharing lessons with each other brings a consistent language to any team. It builds the team ethos. It builds camaraderie. Last summer we all read The Go Getter. So now we all know exactly how big a deal it is if we say that someone is a “blue-vaser” (no, I won’t explain – you’ll have to read it). After reading Now, Discover Your Strengths, we all understand why some team members like to spend a lot of time in the details, others love analyzing numbers, and still others just want to have a conversation about feelings.

“Be as careful of the books you read,
as of the company you keep;
for your habits and character will be as much influenced by the former as the latter.”

I keep a list of books people tell me are a “must read” – it’s as simple as creating a “Book List” in the iPhone Note app. This way, I have a list at my fingertips and there isn’t a lull from one book to the next – I immediately have the next one teed up and ready to go.

If you don’t already have a list, I can help get you started! I still like some of the classic books from decades ago - especially for lessons on dealing with people, inspiration, or sales. Some of my favorites include…

• The Power of Positive Thinking (& all else by Norman Vincent Peale)

• The Greatest Salesman in the World (& everything by Og Mandino)

• How I Raised Myself From Failure to Success In Selling, Frank Bettger

• As A Man Thinketh, James Allen

“It is what you read when you don’t have to that determines what you will be when you can’t help it.”

It seems as if today’s authors have an easier time getting published, and it looks like they often chase the trendy topic or buzzword title without as much research. However, the greats still stand out. Some favorites written during my adulthood include…

• Who Moved My Cheese? Spencer Johnson

• The 21 Irrefutable Laws of Leadership (and all other books on leadership & communication by John C. Maxwell)

• Start With Why, Simon Sinek

• The Five Dysfunctions of a Team, Patrick Lencioni

“You know you’ve read a good book when you turn the last page and feel a little as if you have lost a friend.”

This lesson came from many of the dull books that didn’t make my lists above. Some authors have one point and try to squeeze an entire book out of it. If you found the one point in the first third of the book, stop reading/listening and move on. You have plenty of better things to do…AND READ!

Now it’s your turn. What difference has reading made in your life? …career? What are some of your favorite books? Comment below or email me at reid@freshbenies.com.