5 WAYS DISRUPTORS THINK ABOUT FAILURE (AND HOW YOU SHOULD, TOO) 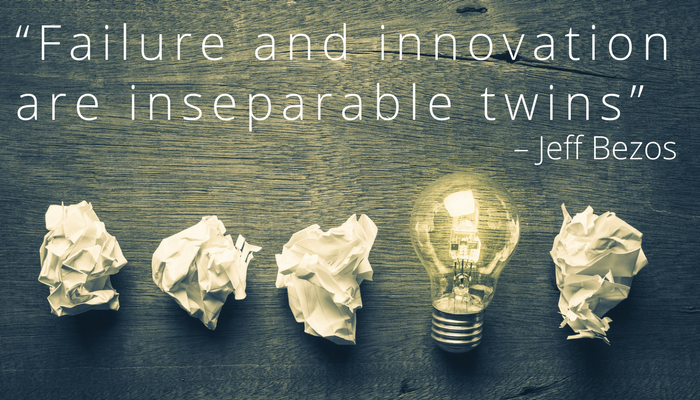 Remember the Amazon Fire Phone? Did anyone besides me own one?

I anxiously awaited my new phone’s arrival in July of 2014 – excited to be an early adopter of new, cool innovations. My excitement quickly turned to frustration once the phone arrived.

Six months later, it went back in the box and I went back to owning an iPhone.

Regarded as one of Amazon’s biggest misfires, they swallowed a $170 million loss with the phone’s failure. As a reference point, that’s the production budget of Beauty and The Beast which included Emma Watson, a talking candle stick and lots of other fun stuff!

As a former Senior Manager at Amazon (and thanks to Jeff Bezos), I learned that “failure and invention are inseparable twins.”

1. They know that failure is not an OPTION. It’s REQUIRED.

Companies that don’t innovate will be extinct. Innovation requires failure. This is a harsh truth in the era of “digital disruption.”

Digital giants have found great success at taking new approaches in industries where incumbents fail to seize the next wave of innovation (click here for my article about how artificial intelligence and machine learning could disrupt healthcare). Google, Amazon, Microsoft and Apple have all announced intentions or are already working to address the user experience in healthcare.

When the return on investment for a new operation or innovation appears low, we often fail to invest our time and resources. Ultimately, this locks down current business models, preventing us from making a pivotal move.

Key questions: In your organization, are there innovative ideas that are seemingly insignificant, but could mature enough to make a difference? Is your organization averse to trying these ideas for fear of failure?

When I first started my career, I was allowed to experiment with fresh ideas as long as we tested and proved instant success for full scale launch in 6 to 9 months. Today I look back at those ideas and they were evolutionary versus revolutionary. We only launched new ideas that we knew carried minimal risk.

After joining Amazon, I quickly learned that innovation meant revolutionary ideas. Yes, we would dig deep into new ideas and understand the marketplace through significant research, but we understood that risk was involved in the disruptive outcomes we were aiming for. The culture supported taking those risks.

Jeff Bezos stated in 2016, “To invent you have to experiment, and if you know in advance that it’s going to work, it’s not an experiment. Most organizations embrace the idea of invention but are not willing to suffer the string of failed experiments necessary to get there.”

Key questions: Is your team incentivized to keep the status quo? Is your organization launching revolutionary ideas that will disrupt your industry?

3. They ask fast and ask often.

When failures occur, don’t look for excuses and blame. I understand this is tough when there's a negative business outcome. In the past, I had strong emotions when costly errors were made. But, I learned to react with less emotion and more action by digging into the facts to gain perspective. I learned to ask questions (many questions) to find out how it happened.

This approach solicits feedback from the team and customers, which leads to phenomenal conversations. These conversations unveil new solutions and how to prevent future errors.

Key questions: Have you developed a culture that’s free of excuses and blame? Are you developing your team to ask questions that get to the root cause of the negative outcome?

4. They create a bias for action.

When a disappointment happens, figure out what options you have. There’s rarely an “all or nothing” situation! Then, look to the future and set new objectives. Samuel Smiles said, “We learn wisdom from failure much more than success. We often discover what we will do by finding out what we will not do.”

Amazon learned from their failure of the infamous Fire Phone and went on to successfully launch Amazon Echo, which has found great success and entered America’s lexicon as “Alexa.” In this article, Lauren Goode, Senior Writer for Wired Magazine, explains that Amazon’s smartphone flop was the best thing that ever happened to Alexa.

Key questions: What actions are you taking when you experience a failure? Are you moving quickly to 1) not repeat the same missteps and 2) apply learning from the experience?

Here’s the problem: failure might be a great teacher, but it’s also a cryptic one. Figuring out its lessons isn’t easy (especially when we’re still nursing a bruised ego and swimming in frustration).

To learn from our failures, we need a way to decode the “teachable moments” hidden within. I’ve found there are three steps to learn from a disappointing outcome:

2. Reevaluate the preparation: Were enough time and resources spent seeing around corners on behalf of the customer?

3. Reevaluate the execution: Did any external or internal circumstances derail the innovation? How can such disruptions be addressed in the future? Did this solve a customer pain point or did it create too many hurdles for the customer to overcome?

In the words of Steve Jobs who notoriously experienced great highs and lows....

"Sometimes when you innovate, you make mistakes. It is best to admit them quickly and get on with improving your other innovations." – Steve Jobs

Now that I’m an insider in the healthcare and employee benefits industries, I see there are only a few people leading the disruption. This means there’s GREAT opportunity for those who take these lessons to heart.

If that’s you, here are some additional resources to check out:

Now it’s your turn! How do you act like a disruptor to create space to take risks and learn from failures? What revolutionary ideas are you actively working toward? Comment below or email me at tonia@freshbenies.com.

Tonia has been a leader in the retail and tech industries for 20+ years with a focus on driving vision and growth strategies in large volume business sectors. Her most recent experience includes Director positions at Amazon where she implemented complex company-wide enhancements, led the launch of innovative products, and created disruptive strategies. She joined freshbenies as Chief Strategy Officer because of her passion to provide practical tools that simplify the American healthcare experience.