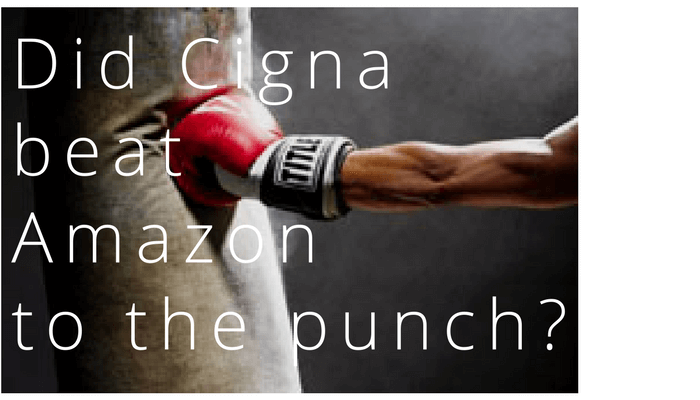 Health Insurance giant Cigna announced on Thursday that it has agreed to buy Express Scripts, the nation's largest pharmacy benefit manager (PBM). This is yet another blockbuster deal that continues to shake the healthcare landscape.

The completion of the deal would mark the end of Express Scripts as the largest major independent PBM responsible for the prescription plans of more than 80 million Americans. The is the latest in a wave of deals and consolidations that are sweeping the industry. Think CVS/Aetna, Amazon/Berkshire Hathaway/JPMorgan Chase, Walgreens/AmerisourceBergen.

When I was at Cigna from 2010-2013, the company embarked on a major brand revitalization campaign. Cigna rebranded from all caps CIGNA (why are you yelling at me?) to the more consumer-friendly Cigna. It also livened up its brand, logo and color palette to something much more accessible.

This was part of their focus to become more relevant in the B2C marketplace, but it was also a statement to the other carriers that Cigna wanted to be considered part of the "Big 4" carriers along with UnitedHealthcare, Anthem/Blue Cross and Aetna (sorry Humana!).

This acquisition is a clear continuation of that desire to be relevant and to stay competitive with their peers. Make no mistake about it, this is a massive acquisition for Cigna (especially at a $50 billion+ price tag), but clearly, they believe it's the necessary move to stay in the game in a major way.

2. Brokers should be on alert

With all this competitive activity and industry consolidation, my concern is that carriers could potentially lose focus of their members - YOUR clients. Just imagine some of the challenges associated with trying to integrate two massive corporations like Cigna and Express Scripts, or CVS and Aetna.

While there may be long-term strategic benefits from these mergers, the short-term member disruption could be significant. Now, more than ever, your role as benefit consultant is of vital importance to your clients to ensure their employees are getting maximum value from their benefits.

3. The looming Amazon threat is real and forcing combative moves

Last month's announcement that Amazon was teaming up with Berkshire Hathaway and JPMorgan Chase to try to lower healthcare costs was a major wake-up call for carriers. When arguably the most successful wholesaler enters your turf, everybody should be on high alert.

And even though the details of the partnership remain scarce, it's clear the carriers are responding - and the Express Scripts acquisition is a perfect example. If there was a single target that should have been on Amazon's radar to make a major splash in this new segment, it was Express Scripts.

Think about it: Amazon is in the business of delivering an enormous volume of goods quickly and at a great price. That is exactly what Express Scripts does. It would have been a seamless acquisition and could have given Amazon a tremendous foothold in the industry. Cigna just might have beat them to the punch.

4. The health insurance industry will continue to go vertical

As in vertical integration. I don't believe we've seen the end of the acquisitions for the major carriers. Keep in mind that the health insurance industry saw very little acquisition activity in the entirety of the twentieth century. But in the past few years, we've had two enormous acquisitions pursued and overturned (see Anthem-Cigna and Aetna-Humana).

Since growth within their own industry wasn't enough, carriers looked outside. The logical place to look was at a segment of the business that has become an increasingly large piece of health insurance premiums: prescription drugs. When CVS announced plans to acquire Aetna, it set the industry in motion. Cigna's acquisition is probably not the last we'll see.

This prompts the question - which segment will be targeted next for continued vertical integration?

Now it's your turn. What are your thoughts on the Cigna acquisition and the resulting impact on your clients? Do you have a prediction for what's next in healthcare? Comment below or email me at neil@freshbenies.com.