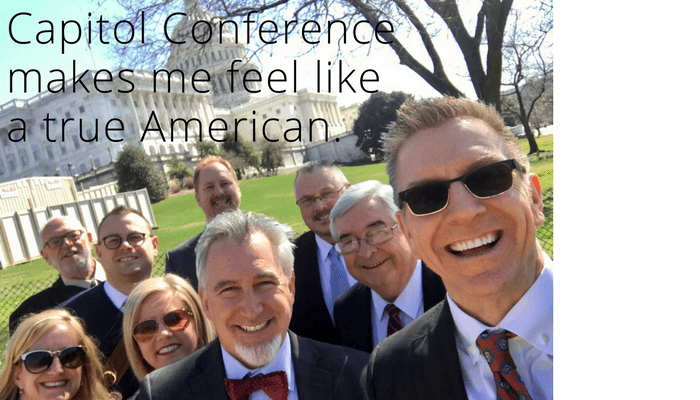 Twenty years ago, I joined the National Association of Health Underwriters (NAHU). A year later I traveled to Washington D.C. for the first time to attend their annual "Capitol Conference."

If you've never been, here's the agenda: you spend the first day and a half learning about current legislative issues and how to talk to legislators before hitting the halls of Congress to (try to) guide them. "Lobbying" to help lawmakers understand how benefits are actually delivered back home is inspiring. Back then, being involved in the process made me feel like such an American (not bad, considering I was still a Green Card-carrying Canadian at the time).

Fast forward nineteen years: I'm now an American citizen and just returned from my 10th NAHU visit to the hill. If you weren't one of the 800 people who attended, I'm sharing my top 10 learnings from NAHU Capitol Conference 2018…

1. There is bipartisan hope

The growing divide between the right and left, and political viciousness are frustrating. This week I was happily surprised that some legislators are working across the aisle with their brothers and sisters. The Problem Solvers Caucus came to speak about healthcare issues in America. Their willingness to actually debate issues and make bipartisan decisions together was inspiring. It's been years since I've heard that type of partnership in DC. I have new hope.

One of my favorite sessions was hearing Stuart Rothenberg (Senior Editor of Inside Elections) theorize about what might happen in this fall's election. He explained that mid-term elections typically pull out voters who are upset and want change. He noted, "This year, suburban women count more than any other group."

The House has more moving parts. The Democrats need to gain 24 seats to take power (out of the 435 total, for those of you not tracking that point of trivia). Here's another great piece of trivia: many Republicans are in tight-race districts, including 23 who won their Seat in a district that voted for Hillary. That's not insignificant - especially if Democrats go to the polls "to stop Donald Trump." In that case, Democrat control in the House is a possibility.

It's no secret that money talks in DC because it gets people elected and re-elected. If you don't show your support for legislative candidates with contributions, you don't get to talk with them very much.

The NAHU PAC is called HUPAC (Health Underwriters Political Action Committee). Its goal is to "raise funds from NAHU members for the purpose of supporting the political campaigns of candidates who believe in private sector solutions for the health and financial security of all Americans." It's one of the 10 biggest healthcare PACs in the country and is the fuel that drives the NAHU engine.

I'll make a strong statement: if you make your living from the healthcare industry, and aren't a part of NAHU, then you're riding on the coat-tails of others. I'm very glad they've been fighting for us for decades. Click here to join (and tell them I sent you). At the least, learn about and contribute to HUPAC to defend a healthy industry. It's a very efficient way to get your voice heard.

My next few lessons come from the talking points we were guided to discuss during our time with legislators.

4. NAHU talking point: the Individual market needs to be stabilized

NAHU has been advocating to keep healthy competitive markets for carriers. This year's ideas include allowing…

To encourage consumerism with group and individual members, we suggested allowing contributions equal to the Out-Of-Pocket Maximum, and a limited number of covered office visits before the deductible is reached.

Many legislators look at the tax-free status of benefits as "their money" - and they have plenty of places to spend it. Let's stop talking about taking it away from the 175 million Americans who get benefits at work. 'Nuf said.

Would you like to see a standing-O from employers across the country? H.R. 3919 suggests a new voluntary reporting system that would dramatically reduce the (can I say "crazy"?) burden of collecting dependent Social Security Numbers and a slew of other details.

It's been a topic for 8 years, but it sounds like it's becoming clearer to more legislators. There's now bipartisan H.R. 4575 to remove broker compensation from the Medical Loss Ratio calculation.

NAHU suggested changing classifications of broker appointments (what brokers can say), how to code patients under observation, and to allow COBRA to count as Creditable Coverage.

10. There's a new generation of LPRT

The Leading Producers Round Table (LPRT) is a 75-year-old recognition program for brokers and carriers who sell benefits.

What else does LPRT stand for?

Leadership: The members are top leaders in sales and service

Perspective: Gained by rubbing elbows with other LPRT members at exclusive events

Recognition: This is THE elite peer recognition program for health insurance agents

Transparent: It's easier to apply than ever before!

Did I mention I'm the LPRT Chair this year? For the first time, LPRT qualifiers came together at Capitol Conference for a Think Tank discussion about how to improve our businesses. Click here to learn more and apply for this exclusive group so you can be included in the LPRT special events at the June NAHU National Convention (email me at reid@freshbenies.com with questions).

I've come a long way in 19 years. I've been frustrated by the legislative process, the election cycle and the political rhetoric. I've been insulted when the health insurance industry was vilified by politicians who knew little of the industry or the work we do. However, because of Capitol Conferences I've been far more engaged, in-touch and empowered. And I've had powerful stories and insights to share with clients. I hope I delivered some insight and inspiration to you, too!

Now it's your turn! Did you attend this year's Capitol Conference? What were your top insights? Comment below or email me at reid@freshbenies.com.