MAKE STRESS YOUR FRIEND (OR ELSE!)

Are you familiar with TED Talks? TED stands for Technology, Education and Design. They hold conferences all over the world with speakers that address a wide range of science and culture topics. Sound boring? It’s NOT! The speakers are given a maximum of 18 minutes to present their ideas in an innovative and engaging way, so they're rarely boring and they really keep your attention because they're short. The website says "1500+ talks to stir your curiosity" and it's very true!

Have you had moderate to heavy stress in the past year? How do you feel about it?

We’ve been trained to think of stress as public enemy #1. In this TED Talk video, psychologist Kelly McGonigalconfesses her fear that something she’s been teaching for the last 10 years is doing more harm than good.

She’s been telling people, “Stress makes you sick – it increases the risk of everything from the common cold to cardiovascular disease,” and continues, “Basically, I’ve turned stress into the enemy.”

But, she’s changed her mind and she outlines her case very convincingly based on a recent research study.

See below for the short version (but watch the video!). 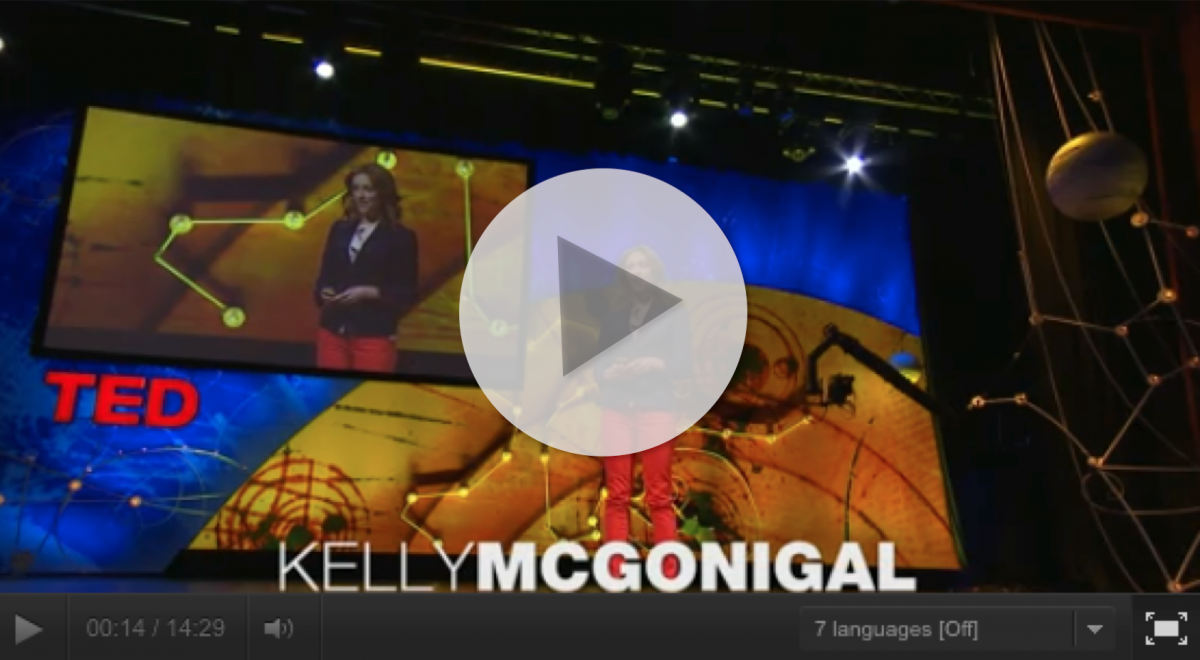 The study followed 30,000 US adults for 8 years.  They started by asking, “How much stress have you experience in the last year?” Then, “Do you believe that stress is harmful for your health?” Then, they used public death records to find out who died (that’s cold!).

The bad news? People who experience a lot of stress had a 43% increased risk of dying.

The good news? That was ONLY true for the people who also BELIEVED that stress was harmful to their health. Those who experienced a lot of stress, but DIDN’T view stress as harmful were no more likely to die. In fact, they had the LOWEST risk of dying of anyone in the study (including those with relatively little stress).

Here’s the kicker: Over the 8 years of the study, 182,000 Americans died NOT from stress, but from the BELIEF that stress is bad for you.

Apparently, Gandhi was right when he said, “A man is but the product of his thoughts. What he thinks, he becomes.”

Here’s a tip:  can’t fit 18 minutes into your day to watch?  I listen to 2 to 4 TED Talks a week on my iPhone or iPad while I'm getting ready in the morning.  Really, how much concentration does it take to do your hair and makeup for the 14,000th time?  I have skills – I can watch and curl at the same time. I’ve found it to be a great way to wedge in some education time (and that really reduces my stress level)!

Now, it's your turn!  What are your stress-relieving secrets?  Were you surprised by the info in this video?  Comment below!