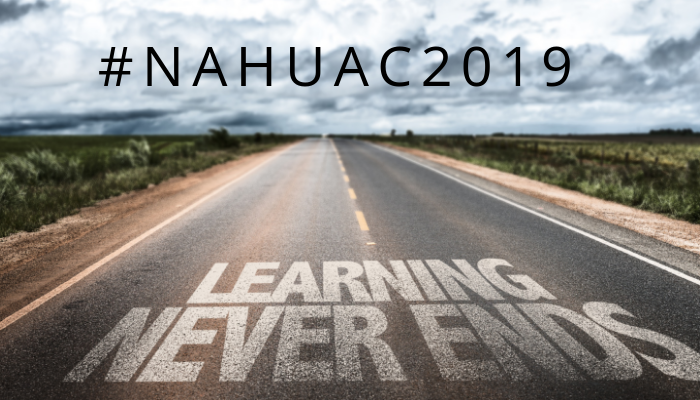 If you’re not familiar with NAHU, the organization represents more than 100,000 licensed health insurance agents, brokers, general agents, consultants and benefit professionals through more than 200 chapters across America. Our freshbenies team has attended this conference for years and it’s mentioned in our article listing the top 10 employee benefits conferences to attend.

If you weren’t able to attend (or if you were there, but had a little too much fun and don’t remember everything), I’m sharing our team’s top seven takeaways from this year’s convention…

Since NAHU conducts advocacy efforts at the state and federal levels of government to advance the interests of health insurance professionals and to promote affordable and responsible private health insurance market solutions, we can always expect an update from Janet Trautwein and the NAHU team about what’s hot in D.C. Two of this summer’s current issues are:

The hottest healthcare topic, however, continues to be the push for “Medicare For All” (M4A). For the first time, hearings are being held in the House (note this won’t happen in the Republican Senate). Don’t expect to see a vote called in the House, as the Democrats would need 217 votes to win, and they don’t have enough.

What is Medicare For All? All the Democrat candidates support M4A but there’s a wide variation in approaches. This is NOT Medicare as we know it. Rather, think of the Canadian model: a government-run system funded by taxation. The average tax increase is estimated at $24,000 per year. The proposed global budgeting means there would be significant waiting lists, as in other countries.

One new distinction I heard is that NAHU foresees various proposals. One model would allow for private coverage which would exclude the ability to elect the Medicare For All option. In the first Democrat debates, Bernie Sanders and Elizabeth Warren were the only candidates that supported a M4A program that would eliminate all other private coverage. You’ll want to be on the lookout for this as the discussions continue.

3. The Dangers of Auto-Immune Disease

I’ll admit, this is what I texted to my friends when the entire NAHU event began with a 4-hour marathon morning opening session on health and wellness: “You know it’s gonna be AWESOME when the first thing the speaker says is, ‘Today I want to talk about auto-immune disease.’”

Dr. Peter Osborne, bestselling author of No Grain, No Pain, kicked off the session noting that our country has evolved to treating symptoms with “chemicals for life” (pharmaceuticals) – and we’ve left behind patient empowerment through diet and lifestyle changes. He shared some frightening stats about how quickly auto-immune diseases are growing compared to decades ago. He blames more processed foods, the Hygiene Hypothesis, lack of sunshine, excessive stress, air quality, water quality, medical interventions, lack of sleep, and lack of physical activity. He warned, “When a doctor tells you that your condition has nothing to do with what you eat, don’t believe it. It has EVERYTHING to do with what you eat.” While we have bodies that have evolved to their current state because of the choices we’ve made, the good news is that we can change it. We can’t change our genes, but we can CHOOSE to change our chemistry and our physical selves through better choices. At one point he said, “If you don’t like what your doctor is telling you, fire your doctor and find someone who cares.”

4. The Rising Prevalence of CBD

Thankfully, after that somewhat gloomy report, we took a turn to cannabis. Our speaker and true expert was Elisabeth Mack of Holistic Caring who noted that wellness companies are already putting CBD into everything - and she thinks that one day, carriers will cover cannabis medicines. I don’t know about that, but I can honestly say I’ve never heard from a more prolific, knowledgeable speaker on this topic – especially with regard to the science behind why and how cannabis medicine works.

Our keynote speaker was Sergeant Cedric King who stepped on an IUD in Afghanistan in 2012 and lost both his legs as a result of his injuries. Sergeant King shared the intense battle he waged just trying to regain the ability to walk across a room as a double amputee. He inspired us with what became his mantra as he failed again and again: “If you plan on doing anything, plan on falling down on the path. The key is getting back up again. And again. This creates resiliency. Don’t fear the fall if you know you can get back up again.”

Early in his recovery process, Sergeant King stumbled into watching some footage of Oscar Pistorius, another double amputee, who at the time was scorching competition while earning the nickname “Blade Runner.” This inspired Sergeant King to want to one day run a marathon. He shared this dream with his doctor, who quickly reined in his aspirations. But Sergeant King was resolute and worked tirelessly to regain his strength and rebuild his stamina. Just 21 months after his double amputee surgery, he completed the Boston Marathon, a race he has completed four more times since then. There was a ton of work that went on behind the scenes for him to make that goal happen. War knocked him down, but Sergeant King always got back up. He was a true inspiration and his message was a great reminder for all of us.

The breakout sessions afforded some opportunities to network with peers and hear some of their best practices. Josh Butler and David Saltzman teamed up to talk through some unique strategies that Butler Benefits has implemented to meaningfully bend the cost curve, most notably with Direct Primary Care (DPC) and Concierge Rx. Emma Passe, Rachel Miner and Matthew White did a fun panel that talked through some of the solutions available when they work with employers to create their own value-based plan design with DPC, reference-based pricing, transparent PBM’s and direct contracting. Jim King led a panel discussion with Lily Lam and Mike Deagle who discussed points to consider when either selling your agency or trying to acquire a book of business. John Sbrocco shared insights on his unique approach for winning new business without taking a BOR. Craig Lack talked through some strategies for making your client discussions focused on highlighting your expertise rather than just bringing various carrier quotes to the table.

And of course, there was a vendor expo that showcased multiple interesting companies that are continuing to push the boundaries of innovation. If you were a NAHU convention attendee looking for new ideas – or to connect with your current vendors – this was a great place to do it. The volume of new and unique solutions proves we haven’t run out of new ideas to fix healthcare!

Now it’s your turn. What other insights or highlights did you have from this year’s NAHU convention? Comment below or email me at neil@freshbenies.com.