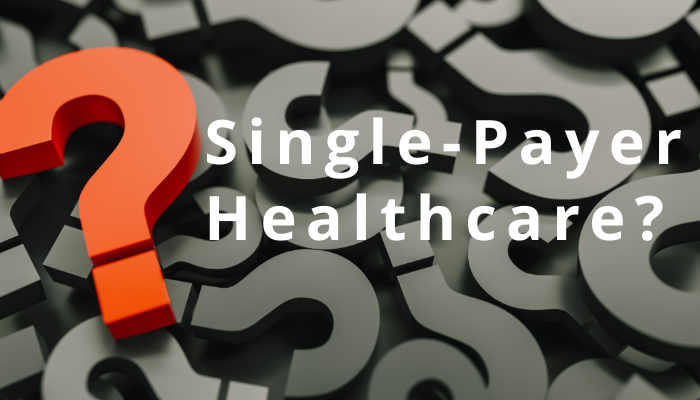 Did you catch our recent webinar outlining 3 ways to skillfully approach prickly #MedicareForAll conversations? If you missed it, click here to access the recording and other resources.

Many thoughtful questions were posed from participants during that session. Today I’m sharing six of those questions along with my answers…

A: There are a few scenarios at play…

Q. Do you know the mortality rates in countries with single-payer systems?

A: This is one of the main arguments used by proponents of a single-payer system - questioning why other healthcare systems have a perceived higher-quality than the US. Canadians live 3.3 years longer than Americans. Some European countries live longer, and some live shorter.

To learn why I don’t believe this argument is relevant, listen to another webinar I recorded called 3 Myths of #MedicareForAll - this specific point starts at the 24-minute mark.

Q: The American College of Physicians announced their support for single-payer plans, but you said there was something they didn’t like about the current proposals. Please elaborate.

A: Various articles including this New York Post piece and this one from The Hill report the professional association for Internal Medicine doctors said they support single-payer legislation. However, they DO NOT like those versions that propose paying providers at Medicare rates.

Here’s the interesting thing: every single bill currently released in the House and Senate (including the Public Option bill) lists Medicare rates as a key feature. Reading past the headline shows they don’t really support foundational elements of the legislation.

Q: I saw an interview with Dr. Adam Gaffney about Medicare for All.  He is very pro, and states that physicians won't get paid less because there will be so much administrative savings. How do we reconcile this?

A: I was intrigued by this interview. Dr Gaffney continues noting the administrative cost savings will be big enough to make up for all the needed savings. What does he base that on?

More than half of today’s healthcare dollars are spent on provider payments to doctors and hospitals. Therefore, it’s obvious that provider reimbursement level is the most significant opportunity for savings.

Q: You spoke about wait times for MRIs in Canada being 9.3 weeks. What about those in the U.S. who don't have health insurance and never get an MRI?

A: In America, anyone is allowed to get an MRI. It’s only a question of who’s going to pay the bill. It may be private insurance, Medicaid, Medicare, CHIP, VA, or cash (and there are savings programs to help). That’s what U.S. freedom is about. At least in America there’s not a law that says it’s illegal for a person to pay cash for an MRI – which is the Canadian law.

Q: Why don't Medicare recipients have long waits for care?
A: Good question. I think it’s partially balanced because US physicians have a mix of both high-paying (private) and low-paying (Medicare/Medicaid) patients. But the biggest reason is that European and Canadian health plans are absolutely capped by a global annual budget (when the money is spent, additional visits will not be allowed). By contrast, Medicare will pay for all the visits that actually occur. While Medicare has a prediction of the national annual expenditure, doctors will still be paid if they happen to bill for 20% more visits.

Now it’s your turn! Which question do you hear discussed most often? Do you have another question you’d like us to answer? Comment below or email me at reid@freshbenies.com.