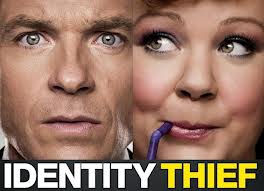 The movie Identity Thief came out last weekend – have you seen it?  Well, it’s hilarious and a little scary at the same time!

If you haven’t seen it, a financial professional named Sandy Bigelow Patterson (played by Jason Bateman who repeats “it’s a guy’s name, too” multiple times) has his identity stolen by Melissa McCarthy’s character, a serial identity thief. Feeling totally hopeless, Sandy decides to take things into his own hands and chase down his thief.  Needless to say, hijinks ensue! Click here to watch the trailer.

As I watched, I thought to myself (I didn’t “say to myself” because we were in a movie theatre), “Is that really how it happens?”  To attempt to alleviate my fear, I had a chat with Dave Carlson, President of the Membership division of Augeo Consumer Engagement Services, LLC, who provides an identity theft protection program called Safe Identity.  They’ve been providing these peace-of-mind identity protection services since 2005.  His service makes me feel better, but the identity theft stories he shared scared me.  So, in the spirit of “misery loves company”, I’m going to share some of the stories to scare you, too :-)

Let’s start with a few stats about the growth of identity theft in the U.S., shall we? First, it’s been the top consumer complaint to the FTC for the past 12 years in a row and on average, an identity theft fraud event occurred every 4 seconds in 2011. To quote Dave: “Funny movie. Serious crime”

To be sure we’re all on the same page, Dave wanted me to educate you on the difference between “credit card fraud” and “identity theft.” In Dave’s opinion, “While taking existing credit cards and using them is a serious crime, it’s not true identity theft which can have long term devastating effects on the victim. Credit card fraud is short term and relatively easy for companies and consumers to catch. True Identity theft is when someone accesses your resources to get credit or other benefits in your name. An identity thief wants to assume your identity long-term, not just to use your credit card for a couple purchases. They are looking for ways to clone you and make money from your information for as long as they can!”

Wondering how that works? Let’s learn more as we move to the 5 truths and 3 fallacies of the movie:

Truth #1: It can happen to you

In the movie, Jason Bateman gets a call from what seems to be a reputable financial institution stating there was a problem with his account. She would fix it, but just needed a few pieces of information.

Obviously, giving your personal information over the phone is really stupid. But no matter how savvy you may be, there is NO way to prevent someone from stealing your identity. Over 605 million records have been compromised in data breaches since 2005 – they include Citibank, TJX Stores, Michael’s, Sony’s Playstation Network, etc. Most of us have no idea if we were one of the “compromised,” but here’s one thing we do know: no one is 100% safe - newborns to the deceased are affected. No matter how careful you are, we live in an “information age” with our personal information floating out there for anyone to access.

Truth #2: You could get arrested

Getting pulled into a police station because of a felony “you” committed does happen. In all cases, you're guilty until proven innocent and most government agencies DON'T help. It’s 100% your issue to solve.

Don’t believe it? Click here to read the full story of a Wisconsin man who has been arrested multiple times for cocaine possession. While the authorities researched his alleged identity theft story, he was held in jail for days. As the article succinctly states, “Losing your clean credit history is one thing; losing your freedom is another.”

Truth #3: Your credit rating could be ruined

In the movie, Jason Bateman’s character had his credit cards cut up by a gas station attendant. While that’s humiliating, the story of a Connecticut salesman (John) whose identity was stolen by a 20 year old is heart wrenching. The thief charged $265,000+ in 4 months using the John’s identity. As a result, John spent over 2,000 hours trying to reclaim his life. Despite letters from the Justice Department confirming that he was a victim, Harrison is still being harassed by creditors and remains nearly $140,000 in debt. 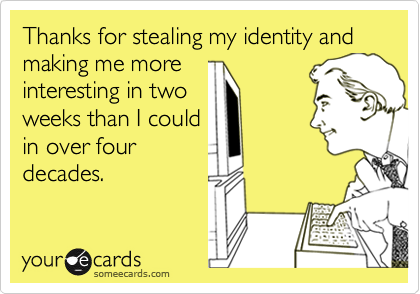 Truth #4: It could affect your job

In the movie, Jason Bateman’s character worked in the financial industry and his job entailed handling funds for the firm’s clients. As a result, his job was on the line due to “his” bad credit and arrest records. Remember that Wisconsin man accused of being a drug dealer? He was fired from one job and denied employment benefits after being laid off from another job (as his wife was just about to give birth to their first child) - all because of his  “criminal record.” His driver’s license was also suspended impeding his ability to do most jobs.

Truth #5: It could affect your family

Amanda Peete, who plays Jason Bateman’s wife, and their 2 daughters are very supportive throughout the entire process. In real life, things can get a bit ugly. Consider the story of a woman who was accused of giving birth to a meth baby. Why? Because the woman who stole her identity to access hospital and medical services gave birth to a meth baby under her name.  For days, the accused woman was in jeopardy of having her children taken away by the state.  Later, when the victim had kidney infection, she found that her medical records had become comingled with her thief’s. That may not sound like a big deal. But, if it happened to you, you could be given a blood transfusion with the wrong blood type or a medication to which you’re allergic (or not given a needed medication because the doctor THINKS you’re allergic).

Jason Bateman discovered the identity theft in about a day and then spent 7 days on the hunt. First, it takes an average of 14 months to discover an identity theft occurrence (and sometimes years).  And once discovered, the average victim spends 330 hours repairing their identity.  I barely have time to sleep let alone deal with that!

Fallacy #2: You can find the identity thief

While it makes for a funny movie, you’re not going on a road trip to chase down the person who stole your identity and drag them back to your local police station. As the victim, it’s your responsibility to investigate all the data, prove the crime of identity theft and get it fixed with all the affected authorities (creditors, banks, hospitals/doctors, government agencies, etc.). If you have a quality identity theft protection service, they have experts to work with you to repair the damage and restore your good name to its pre-theft condition. That will also save money on gas, diner food and motel rooms!

Fallacy #3: You’re just a pawn in the identity thief’s game

You’re not helpless - you can take steps to protect yourself! Detecting it in the early stages and dealing with it quickly is the important thing.  Dave advises, “Identity thieves have various steps they typically take prior to assuming your identity.  A solid identity theft protection program can usually catch it quickly before it gets too far down the road.  Find a comprehensive high-quality identity theft protection service that looks at your info starting today and backwards vs. starting today and looking forward.  Looking backwards allows you to have a comfort level that there isn’t fraud already underway.”  After being in the business for 5 years, Dave’s biggest caution is to get a true identity monitoring program.  He says, “It’s inexpensive and gives great peace of mind.  If you don’t have one, you’re putting your family at unnecessary risk.”

Here are a few other tips to help protect your identity.  If you need a premium, high-quality identity theft protection program, learn more about the freshbenies card service here.

Now it’s your turn to tell us your story!  Have you had your identity stolen?  Did you have an identity theft protection service that helped you through it? 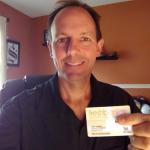